Mao Shan Wang, also known as Musang King, is exceptionally popular among durians enthusiasts. Musang King comes from the Malaysian state of Kelantan, which has a rich history in durian cultivation and exports. This means that they are more experienced with growing this variety than other regions around Southeast Asia.
The name musang king is inspired by Gua Musang, Malaysia’s largest fruit trade centre in Kelantan. The cultivar is also from Tanah Merah, Kelantan. The Mao Shan Wang or Musang King is one of the most popular and valued durians of all.
The most distinguishing feature of Musang King as compared to other varieties is its large size; it can grow up to ten pounds or just over four kilograms for each fruit on average! The skin colour ranges from yellow-orange to brownish red hues depending on ripeness, while the flesh is creamier and sweeter than others like D24.
Musang King or Mao Shan Wang Durian, which have thick, short spines similar to the pyramids, generally are oval to ellipsoid in shape. The colour is light green and occasionally ash-brown. The texture is rich and creamy, like a roasted marshmallow. The Mao Shan Wang’s palate feels sour with sweet undertones. It is pleasant and offers a somewhat smooth scent on the nose, but not overwhelming.

Mao Shan Wang’s flesh is a deep buttery with a golden fluorescent colour that should have a rich, sweet and, at times, bitter flavour. The flesh should be dry, creamy and can easily be lifted off the frequently undersized seed, particularly when it comes from an old tree.

Several aspects are influencing the quality of Mao Shan Wang. These include the type of plantations and the weather during the pre-season.

Due to restricted access and demand, Musang King’s prices have grown substantially over the last few years. Prices have increased by over 200 per cent in Malaysia since 2014. The cost of Musang King Durian is up to 800 per cent more in China because of high demand and small supply.

Due to significant loss in potential earnings, rising prices, and high demand, the Malaysian administration has recently made Musang King Durian production and exports a considerable focus in Agribusiness Ministries and FELDA (Federal Land Development Authority) that promotes durian globally.

DirectDurian delivers fresh-from-tree Musangs straight from Malaysian farms right onto your doorstep in Singapore within 60 minutes. We also provide discount offers frequently, so don’t forget to bookmark the site, and you won’t miss any offers. This way, you can enjoy the king even more with your best friend or family members. The price tag on this fruit is quite hefty due to its scarcity but don’t worry because our friendly delivery team doesn’t charge any tariffs during deliveries. You might also get lucky and receive some complimentary water from them as well. 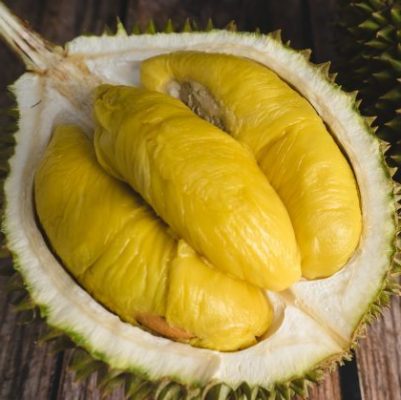